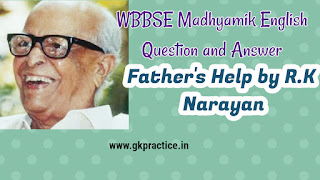 MCQ Question and Answer from Father’s Help/ Lesson- 1
1. While in bed Swami thought it was-
a) Sunday Morning
b) Monday Morning
c) Friday Morning
d) Saturday Morning
Ans: b)
2. On Monday morning Swami hoped that it was-
a) he would lie on bed
b) he did not have to do his homework
c) he would go to fishing
d) he did not have to attend school
Ans: d)
3) Swami wanted that he had a headache on-
a) 9 p.m
b) 9 a.m
c) seven O clock
d) 10 O’ clock
Ans: b)
4) Swami might stay at home was the suggestion-
a) of his father
b) of swami himself
c) of his mother
d) of his teacher samuel
Ans: c)
5) Swami ought to have been in the school prayer hall at-
a) 9 o’ clock
b) 9.30 o’ clock
c) 10 o’clock
d) 10.30 o’clock
Ans: b)
6) Swami was lying on a bench-
a) in his fathers bedr
oom
b) in his room
c) on the veranda
d) in his mothers bedroom
Ans: d)
7) Swami’s reply to his father’s first question was-
a) mother
b) headache
c) Samuel
d) headmaster
Ans: b)
8) Swami will be without a headache on monday if-
a) he does his homework
b) he lies on the bench
c) he loafs about less on Sunday.
d) he argues with his father
Ans: c)
9) Swami knew that his father was –
a) a man of principle
b) a strict person
c) a generous person
d) a knid person
Ans: b)
10) Swami changed his tactics because-
a) the first one failed
b) the second one was better
c) Samuel was that kind of teacher
d) his father was very strict
Ans: d)
11) Samuel was-
a) the headmaster
b) the mathematics teacher
c) the English teacher
d) the person
Ans: b)
12) According to Swami , the headmaster was afraid of –
a) the mathematics teacher
b) the English teacher
c) the science teacher
d) Swami’s father
Ans: a)
>>>Also check
out The Passing Away of Bapu Question and Answer Click Here

a) Where did the father put the letter?
Ans: Father put the letter in an envelope and sealed it so that Swami could not see what was written in it.
b) What did Swami fail to decide about Samuel?
Ans: Swami could not decide if Samuel really deserved the allegations made against him in the letter.
C) How did Samuel look?
Ans: Samuel had to dark face with thin moustache with unshaven cheek. Samuel wore a yellow coat.
d) Why did Swami stopped by the road side on this way to school?
Ans: Because Swami wanted to make up his mind about Samuel.
e) What were the mistakes made by Swami?
Ans: Swami tried to give the excuse of having headache. He told wrong picture of Samuel before his father.
f) Why did not Swami deliver the letter to the headmaster?
Ans: Because his headmaster leave for a week.
g) Why did father write the letter to the headmaster?
Ans: Swami’s  father wrote the letter about the allegations against Samuel.
h) Why did Swami say that he had a headache?
Ans: Because he had not done his homework and he did not want to go to school.
I) Who ordered Swami to dress up and go to school and why?
Ans: Swami’s father  ordered to Swami dress up  and go to school because his father thought that it was not Swami’s headache but it was Swami’s act not to go to school.
J) What was Swami not sure of?
Ans: Swami was not sure of what he said his fasther against Samuel that was true or false.
k) What was Swamis’s excuse for not going to school?
Ans: Swami gave an excuse that he had a headache.